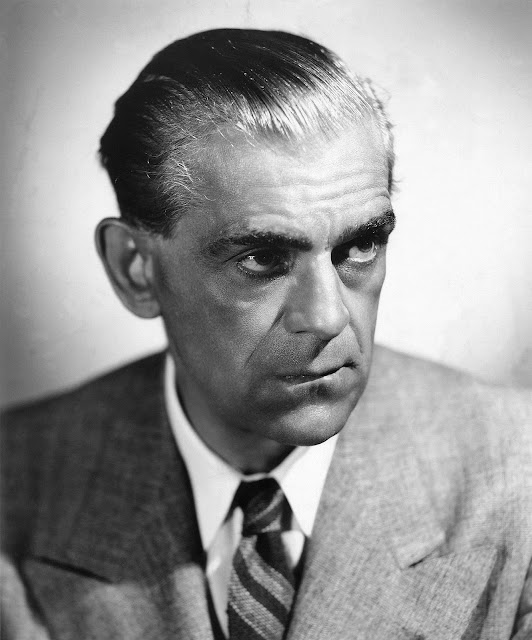 Boris Karloff (1887 - 1969) was an actor famous for his portrayal of eerie monsters and macabre madmen. Karloff enjoyed nearly 200 roles during his long and prosperous life in motion pictures.

In England, Karloff was born William Pratt, the son of an "Anglo-Indian" (British and Indian) naval officer and English woman. He was staunchly refused entry into English society for being an estranged outcast by his parentage and, as a boy, Karloff was bow-legged, had a lisp and stuttered. In time, he developed his own manner of speaking to compensate for these impediments through rehearsal - evolving into the long snorous notes so distinctive in Karloff's speech.

After his mother's untimely death, he was raised by her relatives and excelled in private school - eventually attending King's College or London University (according to imdb.com). In 1909 he migrated to Canada, at the age of 22, to elope with his first wife stage actress Olive Wilton. Karloff would not to reunite with his English family until two years after his breakthrough role in Frankenstein (1931) in 1933 - this time with accolades and photo opportunities with his half-brothers.

The popularity of Karloff and Universal monster flicks he appeared in kept major studios going during the Depression and into WWII with his uncanny portrayal of Imohotep in the Mummy (1932) and subsequent sequels. He worked diligently in the
Universal horror cycle and in lesser B pictures with Bela Lugosi on The Raven (1935), The Invisible Ray (1936), and Black Friday (1940).

In the 1960's, Karloff collaborated with fellow actors Peter Lorre and Vincent Price with the king of B movies Roger Corman. Together they shot The Terror (1963) featuring Jack Nicholson's first major film role, The Raven (1963) and The Comedy of Terrors (1963) which also featured Basil Rathbone. Karloff also appeared in cult classics like Jack Hill's Snake People (1971) that was made in Mexico when Karloff was confined to a wheelchair and was posthumously released after Karloff had quietly ventured to the other shore. Prior to his passing, he worked in animation voicing several characters in Ranklin/Bass's Mad Monster Party? (1967) and narrating the Dr. Seuss classic How The Grinch Stole Christmas (1966).

It should be remembered that Karloff, in recalling his own childhood, was an extremely generous donor to children's charities. Begining in 1940, he played Santa Claus every year for children at Baltimore's Children's Hospital in Maryland, sometimes flying in the winter from LA, NYC, or the UK. He did this even in poor health or confined to a wheelchair until the mid 1960's.