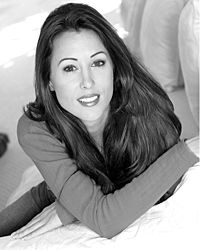 This manling device called "television" came into wide spread usage in the Earth year of 1948. A small, strange device that transmitted photographs at high speed directly into the weak, manling brain.

Thirty-two years later, with the advent of CNN in 1980, the boob tube eventually decimated the theatrical box office and the stag film market as an unintended consequence. Along with new "A" film production being cut back the old beaver reels and the smoky theaters full of fat and suspicious looking men in rumpled raincoats were most thankfully phased out.

The era of softcore on cable television gradually eclipsed hardcore in the form of late night cable programming starting in the early 1980's arena of home theater.

Now, jizz-soaked theaters that featured back to back 11 am to 3 AM Swedish beaver reels and black-and-white jackfilms were censored, edited and then condensed into blocks of television programming or boxed into home videos.

Nikki Fritz, born in April 7th 1964 in Pittsburgh, PA, was an B-movie actress symbolic of direct-to-cable "softcore" film. Nikki has bikini models curves, sweet brown eyes and the unique ability in her chosen genre to remember and deliver her lines. She proved to be one of the most memorable actresses of her genre who regularly gives thoughtful interviews that are filled with an insight into her industry.

Starting out in pictures was tough for her. Regardless of her acting abilities and education, Nikki only found bit roles in A films such as Smokey and The Bandit 3 (1983) where she played a role credited as "S+M Hooker".

Sometimes she worked as a body double, as in New Kids (1985), but mostly in the eighties Nikki worked as dancer in Hollywood both on and off screen. It wasn't until the mid-nineties that she really broke into movies with a Roger Corman produced stinker called Where Evil Lies (1995). After which, Nikki began to find steady lead or supporting roles in another 50 films that were mostly made-for-cable or direct-to-video movies.

In 2002, Nikki gave this interview to the now defunct Video Quarterly:

Video Quarterly: You have worked with a man people consider a low-budget genius of sorts: Roger Corman. What do you think is the most valuable thing you learned while working on a Corman film?

Nikki Fritz: Roger gave me my first starring role on Where Evil Lies. It was the turning point in my career. He was the first one to take a chance on me. I think the most important thing I learned working for him is that he is very loved and highly respected! Roger is the most amazing person you'll ever meet. He has a way of seeing things that is different from the average person. I guess that's why he's king of the "B's" - I don't think anyone could appreciate this genre like Roger has. He's pushed the boundaries of this kind of filming making and made it the wonderful world that I'm proud to be a part of. Look at his track record. Roger started some of the top directors and movie stars , such as -- Martin Scorsese, Francis Ford Coppola, Ron Howard, Jack Nicholson, Robert De Niro, ...and of course...me!

VQ: This is one of my typical questions but I always love the varying answers I get. In the B-Movie realm nothing is normal. What is the most bizarre thing you have had to do on film? 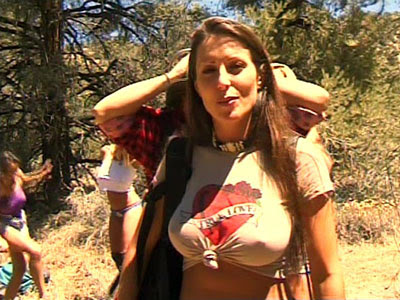 Nikki Fritz in The Bare Wench Project (1999) perplexingly subtitled: No Map, No Food, No Clothes.

Nikki: Well, the most bizarre...ummm...let me see...climbing out of an ice cold lake after a horrendous plane crash (Strip for Action) or getting my whole body painted blue and sacrificing a virgin to a Dinosaur god (Dinosaur Island)....no, how about, doing a strip tease for the cast of Beverly Hills 90210 or, dancing around topless for Keenan Ivory Wayans (Low Down Dirty Shame) or, maybe having a kissing scene with Robert Hedgyes (Epstein from Welcome Back Kotter) Pandora Project or, shooting several different endings to the same love scene (Fast Lane to Malibu High) or, Running terrified through the Los Angeles National Forest in the middle of the night (Bare Wench Project) or maybe playing a stripper who's breasts are covered in blood after the bouncer who's standing next to me gets shot (Go) ...boy.....there are so many, I can't make up my mind.

VQ: Going through your filmography, more than 50 movies to your credit, can you spotlight a favorite?

Nikki: It's really hard to pick a favorite. I suppose the Bare Wench Project was the most fun to shoot, but my series Night Cap was my favorite as far as acting goes. I was able to play such a wide range of emotions on that show. I think it really showcased my abilities. Working on a film is great, but doing a series and being able to do several episodes as the same character is very rewarding. It gives you a chance bond with the other actors and the crew and that shows in the final cut.

VQ: With those 50 movies, you have worked on both a B-movie set and an A-list....any noticeable differences in attitiude, etc?

Nikki: I think the only difference that I notice jumping in and out of the two worlds is the conveniences. It's really great to take time developing a scene, which is a luxury low budget films don't have. As far as the cast...people are people. You can't change the way a person is by their surroundings. If they are high maintenance and hard to work with, it won't matter if it's a $10 movie or a $10,000,000 movie -- and the same is true for the professional. I've seen $10,000/ day actors stop to pick up trash from the set so it wouldn't ruin the shot, and I've seen big actors giving small actors a much needed hug of encouragement in a difficult scene. It is the person. Not what they are working on or getting paid. The love of the craft runs deep to actors with a heart.

VQ: Now you also run a website which seems to be a growing trend in the industry. What got you so involved with the format?

Nikki: Wow, computers....my second love! I've always had a knack for electronics. I was a terrible tom boy growing up, so getting a computer and learning what makes it tick seemed natural for me. It's come in handy now that owning a web site is a fact of life. I developed nikkifritz.com back in 1996, and it's been a labor of love. I do everything on it - from answering email to coding the javascript. I'm to much of a control freak to have anyone touch it......so I've acquired all the skills I need to run it......Photoshop, HTML, JavaScript, Linux, Premiere, etc......and it sure keeps me busy. With the new video download rage, I now have an editing system in my house...right next to my live web cam!

In 2005, Nikki retired from acting to focus on web ventures.