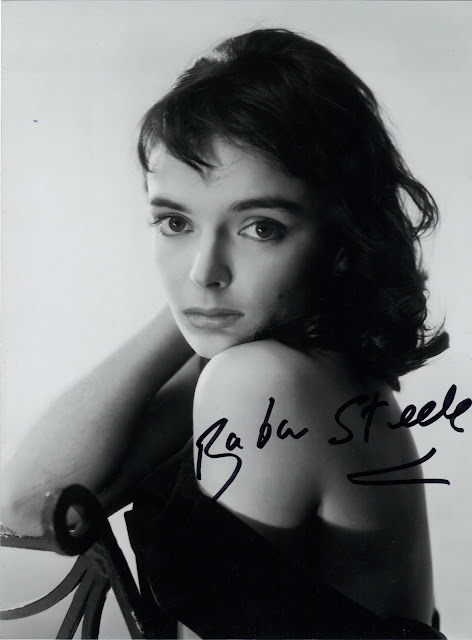 They're coming to get you Barb-ber-ra! And for good reason, too. YOW-ZA!

The enchanting Barbara Steele was born 1937 in England. She became an astounding and elegant emblem of the Gothic horror flicks that were ground out of Italy and Spain in the sixties and early seventies. Her cerebral, serene, erie, and sometimes bloodthirsty performances were better examples of the Gothic genre. This included her roles in Roger Corman's The Pit and the Pendulum (1961), The Horrible Dr. Hitchcock (1962) and it's sequel The Ghost (1963).

Her legions of adoring fans include Tim Burton and also the late Vincent Price who, according to my own sources, accidentally stabbed her with a prop sword the during production of the Pit and the Pendulum in 1961. Since the late 1970's she's enjoyed a cult icon status.

Email ThisBlogThis!Share to TwitterShare to FacebookShare to Pinterest
Labels: Actresses, Castle of Blood, Lady Frankenstein, Mario Brava, Serene Murderess, They are coming to get you Blobara