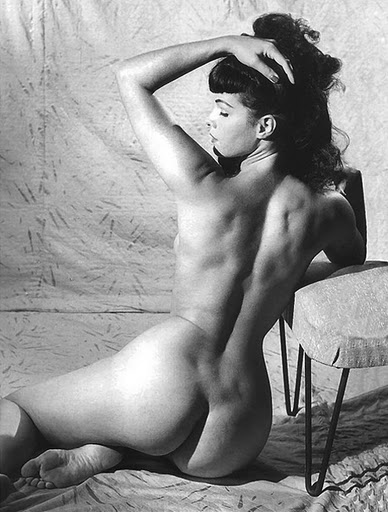 Bettie Page, born 1923 in Nashville and died on December 11th of 2008 in LA just three days after I originally sat down to write this article on her.

To me, and to many people, Bettie was a unique icon of raw sexuality. She became a definitive staple of underground culture for many genres including rock-a-billy, acting and modeling. Her voluptuous figure and baby doll mug created an image of a brunette bombshell.

In her photos she appears free of the traditional inhibitions/hang-ups that dominate popular culture and were even more repressive in post-WWII America. Bettie was internationally loved for her sex appeal, sweetness as well as her striking beauty.

A great deal, some fictional and some factual, has been written about her. Accounts describe her as a very physically gifted model and a talented seamstress, who made or altered her own wardrobe, who was originally raised in abject poverty while looking after her younger siblings.

During her career, she worked in San Francisco, New York and Florida and performed in plays and movies including Varietease (1954) co-starring the curvaceous Tempest Storm and of course, Strip-O-Rama (1955).

Bettie worked extensively in the 1950's with Irving Klaw in NY photo clubs and was featured in Playboy in January of 1955. In 1957, she was called to testify before Congress in an obscenity hearing that destroyed her career. Afterward, Bettie Page married and then re-married (including Billy Neal twice), joined the Church and did missionary work in Haiti - all in a guarded secrecy and out of the public eye. Rumors flew that Bettie was kidnapped or dead as the decades w/out any public appearances dragged on.

Fifty years after her career as a model ended in 2008 85-year-old Bettie Page died at an L.A. hospital where she was admitted as a patient for for heart trouble which she succumbed to, in her sleep, on December 11th 2008.