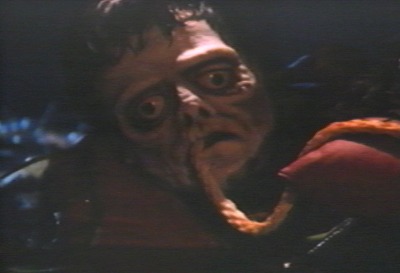 Fishing Safety Hint #12: never, ever let the "slow" children near the tacklebox.

Jim Mallon, the co-creator of MST3K, had his directorial debut in a Troma release filmed in Hayward, Wisconsin in late summer of 1984. The movie was made four years prior to shooting the 14-minute pilot for Joel Hodgson's Mystery Science Theater 3000 that would set him on a strange course for a B-movie director: success.

This film, originally titled "Muskee Madness", sports the tagline of "Fishing Was Never Like This!" and features a psychotic angler whose unlikely M.O. involves hunting his unsuspecting victims with a giant fishing hook during a rural fishing contest. 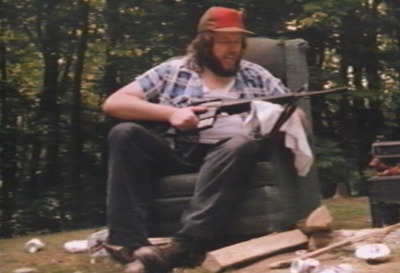 Fortunately, this flick knows that it's a B-movie. In classic Troma fashion, it has it's share of laughs, bad dialogue and over-the-top performances.

Blood Hook is available at:

Email ThisBlogThis!Share to TwitterShare to FacebookShare to Pinterest
Labels: Flicks, Hooked On A Feeling, Jim Mallon, Troma, What's Your Angle