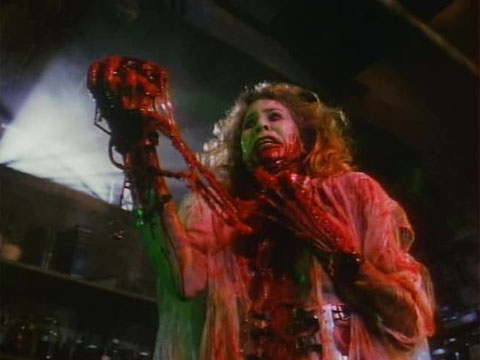 See? I toldja not all women is heartless lunatics! ...um, could I rephrase that?

Date. Mate. Re-animate. This is how one well written review recently interpreted the 1990 installment of the zombie-horror Re-Animator series, Bride Of Re-Animator (1990).

The Re-Animator series combines two genres: Zombie Survival, in the vein of Night of The Living Dead (1968) and Otherworldly Horror as seen in the remarkable Into The Mouth of Madness (1993). It accomplishes this combination fairly regularly with the unique talents of actor Jeffrey Combs, writer Stuart Gordon (Re-Animator (1985), Robot Jox (1990) and Honey I Blew Up the Kid (1992)), and director Brian Yuzna (Return of the Living Dead III (1993) and Silent Night, Deadly Night 4 (1990)). In the series, the cerebral horror of H.P. Lovecraft is applied to classically gruesome material. 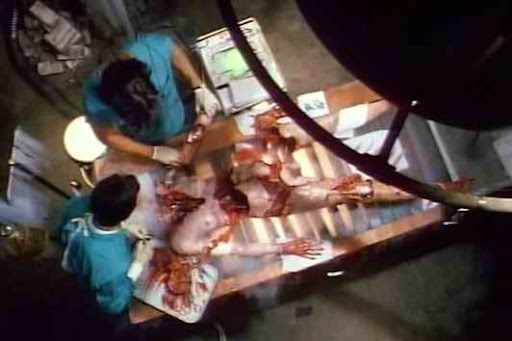 Ol' Doc West goes back to the chopping block - er, drawing board, for the perfect mate.

Combs stars as series anti-hero Doctor Herbert West, a pioneering young lad, who wants nothing more than to rule forever over an army of undead sub-mutants with his re-animation serum. The problem is: Herbert is a bookish square who is hooked on his own elixir - high on his own supply you might say. This presents some classic logistic problems in the form of domineering colleagues, bungling assistants and Miss-Animations: mishaps from the green goo of life being introduced into cadavers too far gone to be anything more that lumpy homicidal retards. Like trying to teach roadkill how to do binomial Algebra - it just ain't gonna happen, Doc. But, wow, does Herbert try anyway!

Jeffrey Combs performances defines the series. His acting talents have seen him play nine different re-occurring roles, in various capacities, on two of the modern Star Trek series. It could be argued that Combs single-handedly resurrected sci-fi acting standards with his role in the final spin-off series Star Trek: Enterprise (2001-2005) as the xenophobic Andorian Captain Shran. The re-occurring role shook the sentimental sugar-coating of TNG* ("I say Numbah One, isn't that agaynst Stah Fleet regulations?") and the dull hesitancy of the lackluster Voyager series. Combs renewal of dedication to character paved the way for J.J. Abrahams and Bad Robot's mixed results re-vamping of Star Trek (2009).


In a recent interview, exclusively with yer pal the Sleaze-A-Saurus in March of 2011 Combs described the genre of horror by saying: "A lot of those (slasher) films are mindless. They don’t come from a literary background.” Combs pin-points the central flaw when describing the bad H.P. Lovecraft "adaptations" and well-financed masked slasher flicks that come in unrelenting waves since in the 1970's original "meanies".

Combs, clearly fearing that he would soon be consumed by the Sleaze-A-Saurus, went on to say: "I think that the movies that I’ve been in aren’t exactly character-driven. They are atmospheric. This sets the tone for the entire film."

This was probably the smartest thing that any scaleless manling has ever said to the Sleaze-A-Saurus, to date. So, Mr. Combs was consumed fairly quickly with not much skull-gnawing. 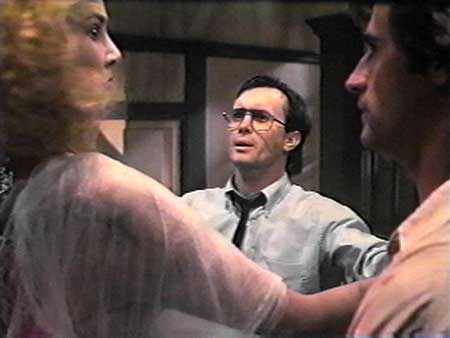 According to research done by on-line miscreants Analog Medium The Bride was given a slightly bigger budget allowing for much better visual FX engineered by a total of five different teams of effects wizards, including the KNB Effects Group, who went on to create FX for Army of Darkness and Kill Bill.

Another Re-Animator installment, House of Re-Animator with William H. Macy reportedly starring as The Zombie President (!), has been announced on IMDB. Writer Stuart Gordon has dismissed this report and previous rumors of another chapter, such as Re-Animator 3D, before. In more Re-Animator news, Bride director Brian Yuzna has a dubious new release in post-production for a 2010 release called Amphibious 3D shot in Indonesia.

Notes: * = TNG or Texas Necktie Guild aka Toledo's Noisiest Gimps was a unpopular reality show that briefly aired (due to a technical difficulty) in the 1990's.