What if the original Friday the 13th movies had today's talent and technology? You'd have the Hatchet film series.

Hatchet is a three part horror movie series by Adam Green that takes place deep in the bayous of Louisiana. A strange curse has made a disfigured little boy into an seemingly immortal maniac with a need for vengeance and a flair for bladed weaponry and power tools - at the end of part two he actually power-sands a guy's skull inwards.

So... this series features a long list of horror film legends including Robert England aka Freddy Krueger, Tony Todd aka the Candyman, Sid Haig aka Capt. Spaulding (House of 1000 Corpses) and stunt-monster Mr. Kane Hodder in the star role of Victor Crowley/Mr. Crowley.

Hodder is a well-known, fan favorite actor in the fandom of Friday the 13th for playing Jason Vorhees in parts 7, 8, 9 and 10 (Jason X). He has worked as a stunt man for almost 100 films including Texas Chainsaw Massacre as Leatherface and acted in many other underground horror films such as Wes Craven's The Hills Have Eyes II (1984), Pumpkinhead II (1993) and as the Beast in Project:Metalbeast (1995). Hodder stars in all three Hatchet films that began in 2006 and ended in 2013. 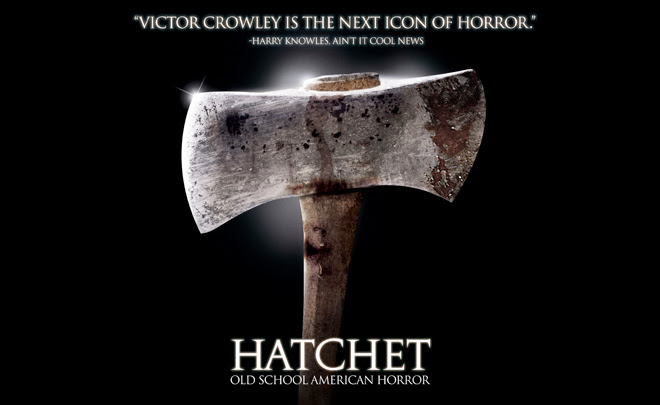 May I axe you a bladed implement related question, Holmes?

Now, if you have ever seen how much vomit and wet garbage covers Bourbon Street during Mardi Gras you may understand these folks collective decision a little better. Getting back to the movie...

Acting under the seemingly helpful advice of Reverend Zombie (Tony Todd) they quickly end up taking a short bus to the dark side of of the bayou. After de-busing, the group goes on a guided night tour of the swamp complete with the worst Cajun accent ever captured on film delivered courtesy of Parry "Kung Pow Kingfish" Shen. Also, random boobs spring out from unsuspecting blouses.

Before long, a cheap foam alligator strikes, the rain machine pours and the hillbilly version of the Predator, who we have not seen or even heard about for the first 40 minutes of the film, still hasn't swooped down from the canopy. At long last, through a pretty darn awful story told by Marybeth and shown in a sepia-toned "History-Vision" we discover 100% of the mad murderer's back story - one that seemingly goes back to the 1930's?

In these exposition scenes, we see a disfigured Jason Vorhees styled kid and learn that there sure are a lot of accidents in Backwoods, Louisiana. After being taunted by kids, Victor Crowley is killed accidentally by his own father during a rescue from their burning one room country shack that other mean kids had accidentally set ablaze.

We then learn that the morose Marybeth is really searching for her lost father and brother who were presumably lost in the swamp and slain by the ghost of the disfigured Victor Crowley. 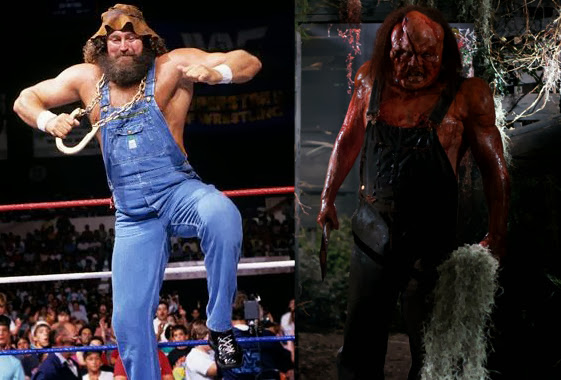 After haunting the WWF as "Hillbilly Jim" in the late 1980's, Victor Crowely became a successful and well-liked homicidal maniac in Louisiana.

Finally, after seeing the stunt-monster once as a child, and nearly an entire hour into the movie(!), we are finally confronted with crazy Mr. Victor Crowley who closely resembles former WWF wrestler Hillbilly Jim. Victor lives up to the movie's title and promptly cleaves Tom From Office Space into two tidy pieces with his trusty hatchet. He does so in front of God and the short bus tour group alike.

Then, something incredible happens. No, not the credits. In the very next shot Victor, courtesy of an extremely capable FX crew, tears the entire top half a character's head off by pulling her upper skull free from her jaw. RIP Mrs. Tom From Office Space and hello "Where was this movie for the past hour!?!"

Unfortunately, the movie veers quickly away from John Carl Buechler's special effects to a plot and performances straight out of Jason Takes Manhattan complete with great ideas like: "Oh mah God! We just walked in a big circle." AND "Let's check out that spooky old cabin over there. Maybe they can help us." Don't forget that classic: "Guys, it looks like he's dead. Let's all go walk in another direction."

Despite being "killed" twice, Victor continues to act under the assumption that the short bus swamp tour group had something to do with additional his original disfigurements and death, or maybe because he don't take too kindly to trespassers, and goes about making sushi out of one hammy actor after another.

At the end of this film it appears as if no one remains for Crowely to play lumberjack with. Roll credits. 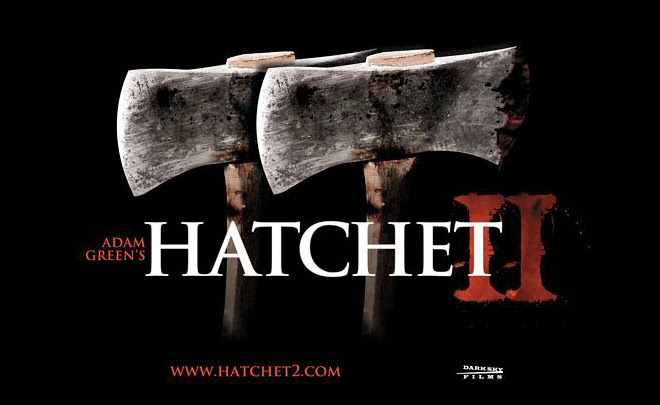 What happens when a movie just a grade above a Sci-Fi channel "feature" gets a sequel? Hatchet II, brohams. Hatchet II.

As the previous movie ended with a cliffhanger we just had to have a sequel. Didn't we?

Adam Green returns to the silver screen to write and direct the thrilling sequel to Hatchet I creatively entitled "Hatchet II". The lead, Marybeth, the Ellen Ripley of this gripping saga, is now played by the adorable Danielle Harris while Tamara Feldman was busy appearing in three TV series including Dirty Sexy Money and One Tree Hill. The sequel, more than likely due to budgetary concerns, is not shot on location. It was in fact filmed within a murky, small sound stage inside of a cyclopean, darkened Hollywood studio instead of New Orleans.

This beauty ends with Tony Todd being chopped up in two and abruptly flayed by way of a clean jerk from Crowley. In the final seconds, Marybeth, once more the sole survivor of the rampaging Crowley, caves in the giant stunt-monster's misshapen head. Then, she unceremoniously fires a single shotgun blast, point blank, into his skull.

These last few scenes are incredibly tedious to watch yet the FX departments, both the practical effects courtesy of the Special Effects Team led by Tom Ceglia and digital from Lit Post, did an extraordinary job. They are not to mixed up with the ham-handedness that permeates the rest of the film. 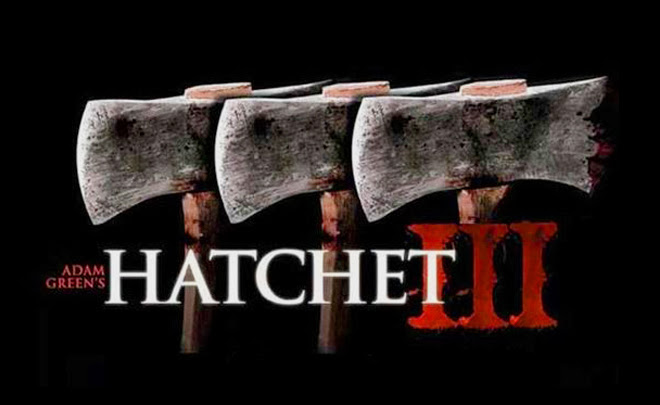 A sequel to a sequel turned out to surpass the original movies? Hold the phone, Ennis!

Hatchet returns once more with a new director, BJ McDonnell, who is known for his camera crew work on horror films and series such as The Walking Dead season two. McDonnell directs Adam Green's third and final Hatchet script and miraculously Alien III doesn't happen. Another major theatrical blunder was averted thanks to McDonnell who shows off some extremely impressive FX and re-focuses the movie around the killer and his final victim a la John Carpenter's original Halloween.

In a genius opening scene, that literally picks up exactly where the previous film finished (three years prior in real-time), with a smoking barrel pulling away from a bloody crater in Victor Crowley's skull - in the general vicinity of where his face used to be - Marybeth relaxes just just long enough to have a emotional breakdown. This gives Crowely, and what is presumably the Vorhees curse, just enough time to make good a quick escape.

This film is very watchable. Once again both the practical effects courtesy this time of David Nash and the digital effects from Jason Richard Miller set the film apart. It is nearly on par with the new Hills Have Eyes re-makes but is much closer to the first two Wrong Turn movies. It's fun, in a way that the Wrong Turn franchise isn't, and the effects are impressive and realistic.

As for Victor Crowely himself, Mr. Hodder is currently featuring or co-starring in 18 new movies to be released in 2014-15 according to IMDb. To date, Hodder has worked as a stunt man in a current total of 97 films and tv shows and has performed in 101 films and counting.