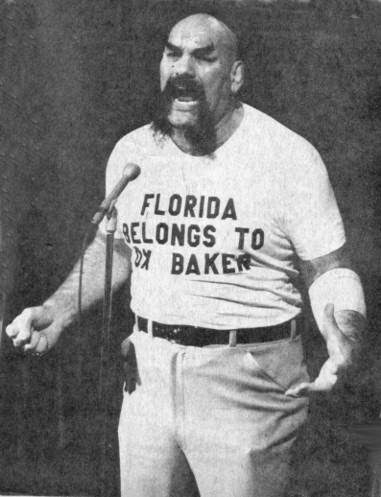 Douglas "Ox" Baker, born April 19th 1934, was a notorious figure in Professional Wrestling who was held indirectly responsible for the deaths of two of his opponents using his infamous "Heart Punch" attack. He or his likeness has appeared in movies and professional wrestling for nearly 40 years.

Baker was born and raised in Missouri, after dropping out of highschool, he trained as a boxer, wrestler and played as an Army football player. When he began wrestling in Kansas City his awesome size and appearence made him a crowd favorite. As the hulking villain Baker, who was unusually articulate offstage, would commandeer the announcer's microphone to bellow, "I LOVE to Hurt People".

Weighing in at 340 pounds and standing at six and half feet tall - it was easy to believe. During his career he faced an estimated 8,000 men in the ring including Hulk Hogan, The Iron Sheik and Jimmy "Superfly" Snuka.

However, his infamy would grow due to events beyond his control. In July of 1971, in a small town in Nebraska, Alberto Torres sustained an injury in the ring with Baker that led to a ruptured appendix. The resulting peronitis killed Torres three days later. The early wrestling community wasn't really that fazed by today's standards. But tragedy struck again in August of 1972 in Savannah Georgia when his opponent Ray Gunkel died in his dressing room immediately after his match with Baker. Gunkel died of an apparent heart attack.

These two incidents made Baker an exile from mainstream wrestling circuits like the newly formed WWF (and modern spin-off circuits like WCW) when wrestling really gained noteriety. These two deaths in the early 1970's happened long before steriod testing could have possibly cleared Baker of any wrong doing. Steroids enlarge internal organs, causes cell damage to organ walls and have been known to cause heart attacks with prolonged usage. Baker has been indirectly taking the blame for the deaths of these two men for 30 years in a time when professional wrestling rewards a wide crop of mundane and unremarkable athletes.

Baker remains an infamous figure. He is best remembered for his appearance as Kurt Russell's gladiatorial opponent in Escape from New York (1984) but also appeared in Jackie Chan's The Big Brawl (1981). Ox Baker's story is feaured in a new documentary called Card Subject to Change (2009), additionally he's authored a cookbook, a children's book, and a coloring book released by Fantagraphics. Baker still continues to make public appearences, in New England, at the age of 75.