It's very important to understand Browning's unique background, as a young man working in traveling circuses, to understand the casting choices and directing style that gave the fantastic stories that he created a heartfelt and horrorifying credibility.

At the age of sixteen, in 1896, Browning ran away from his upper middle-class home in Louisville, Kentucky and joined a travelling circus. Browning worked for years as a clown, acrobat, contortionist and barker for large and small audiences as part of Ringling Brothers and Barnum and Bailey. His early experiences taught him the value of developing respect for his fellow performers and the nature of the audience that he performed for.

In early 20th century New York, Browning found work in vaudeville shows and in the new American film industry. He appeared in silent films beginning in 1907 for Biograph Studios where he met the first movie mogul, D.W. Griffith. The short movies Browning appeared in were made for Nickelodeons - small theaters screening hand cranked reels of very short films with musicial (usually church organ) accompaniment. The projector technology had it's origin in Kinetoscopes. The early Kinetoscope projector was developed by Thomas Edison and played as a flipbook of photographs for one viewer in a small darkened box - operating like an archiac version of a modern Viewmaster. This projector technology, first seen in "penny arcades", was introduced to larger audiences first as road shows and then in a few playhouses and theaters starting in New Haven, Massachusetts and Pittsburg. In these theaters, patrons could watch continuously playing films for a nickel - simultaneously creating the industry of film-making and film critics.

This created an instant demand for entertainment much like television and the Internet today. Storytellers and showmen like Browning and Griffith were there to make that transition from the simple individual penny arcade "peep shows" to more involved narratives for larger audiences in nickelodeons.

After working his way up as an actor in fifty (or more) of these films for New York film studios, Browning followed D.W. Griffith to California to join his new studio, Reliance-Majestic, in 1913. Two years later in 1915, Browning broke a leg and was left with a facial disfigurement in a deadly car crash that killed his passengers - two fellow actors and friends, Elmer Booth and George Spielman[2]. As he convelesced, Browning began writing scripts and his future within the film industry changed. After recovering, he returned to Reliance-Majestic becoming an assistant director for Grittith on Intolerence (1916), a follow-up to the incendiary blockbuster, Birth of A Nation (1915).

After proving himself capable in the management side of film on Intolerence Tod Browning began working as a director in 1917. His early works were fluffy comedies and then collaborations with the legendary Lon Chaney on silent horror films. He directed the first version of The Unholy Three (1925) and then The Unknown (1927). Both films used vivid elements from Tod Browning's past: travel, danger, double-dealing, carnival girls, knife-throwers, and duplicious midgets.

Browning also began a vampire cycle with Lon Chaney in London After MIdnight (1927). The cycle culiminated with his second "talkie", Dracula (1931). Although Lon Chaney was slated to star, the Man of A Thousand Faces passed away from cancer before production could begin, making Bela Lugosi an instant legend in the process.

Dracula horrified audiences who were used to silent slapstick characters, like The Keystone Cops, and no more than sight gags or "tricks" derived from early effects artists like George Melies. The lack of cinematic predecessors to the evil Count contributed to Dracula's success as a film. The Phantom of the Opera or The Hunchback of Notre Dame - both monsterous creations of Lon Chaney - were both silent films. These films were sometime accompanimenied by live music played by an organ score but featured none of the actor's voices.

Beginning in the darkened theatres of the early 1930's, audiences heard the voice of Lugosi's Count Dracula speaking. Audiences must have shivered as his refined Slavic accent eerily describing the strange howling in the desolate Transylvanian mountainside. The grinning spectre described unseen wolves to an unwitting Johnathon Harker as, "...the children of the night...what beautiful music they make."

The effect must have been fascinating and enthralling. Very few other movies were in sound in 1931. None of them were in the horror genre. This made Dracula, and the Universal horror cycle to follow, wildly successful. 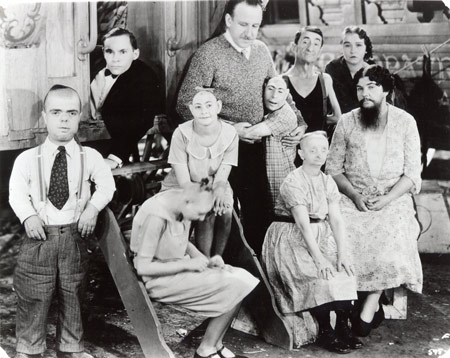 Browning, a former circus performer, is shown here with his actors in a promotional photo in 1931.

Browning's next film, Freaks (1933), has long been a subject of debate as to if MGM was exploiting the actors real life abnormalities. The film was based on a short story called Spurs by Clarence Aaron "Ted" Robbins, a dark story of greed, betrayal and clever retribution among outcasts who bonded into a surrogate family. The movie was made up of real-life circus performers including Johnny Eck, The Hilton Twins, Prince Randian, The Doll Family and long-beloved circus geek, Schlitzie. The script itself was developed in collaboration with actor Harry Earles who also played the regal Tom Thumb-esque, Hans. Earles had previously worked with Browning on the Unholy Three and apparently knew what kind of story to pitch to him.

This film, more than any other horror film, made a deep mark in Hollywood history. It remains legendary for having been banned for decades and derailing Browning's future in film in the process. Although Browning would make a handfull of minor films afterwards, including The Mark of The Vampire (1935) teaming up again with Bela Lugosi.

Browning found himself forced into an early retirement in 1939. Unlike most directors and actors, in particular those working during the Great Depression, Tod Browning retired richly rewarded both commercially and critically successful. He died of lung cancer in 1962.

Email ThisBlogThis!Share to TwitterShare to FacebookShare to Pinterest
Labels: 10-in-1, Directors, Legends, Side Show, Those Who Are Not Made Like Others