John Carpenter in the process of editing Escape From LA in 1996.

John Carpenter is a one-of-a-kind film director who created classic horror movies including the Halloween franchise and Escape From New York, starred in hardcore horror TV shows like Body Bags and was know for writing his own minimalist and experimental soundtracks for his work from 1970 up to the present day.

Carpenter was born in Carthage, New York in 1948 and moved to Bowling Green, Kentucky as a boy. Carpenter grew up in a log cabin and was educated in a one-room schoolhouse. According to his biography, John Carpenter: The Prince of Darkness by Gilles Boulenger, he also grew up around the elements that eventually fed into his movies.

On one hand, he had his musically talented parents - his father was a virtuoso violinist and music professor, on the other hand in talking about his childhood to Robert Koehler in Variety in 1991, he says he was surrounded by indescribable and brutal violence from an early age.

These conflicting elements would contribute to his desire to play and compose, which he does for nearly all his films, that deal with violence and death.

He began college at Western Kentucky University where his father, Howard Carpenter, taught classical music courses but transferred to USC for Cinematic Arts in 1968. One of his short films, The Resurrection of Bronco Billy (1970), won an Student Academy Award and was nationally distributed before he graduated in 1971. The themes of his later films were shaped by the political turbulence in the late 1960's, especially in California, which figured directly into the movies he directed. 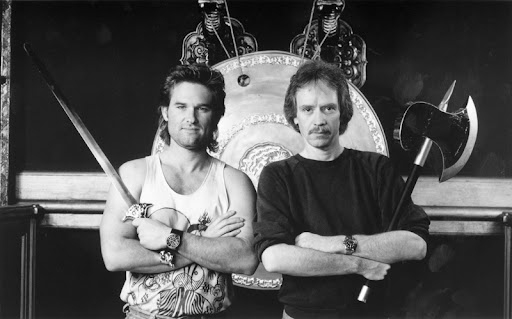 Kurt Douglas and John Carpenter prepare to do battle in Big Trouble In Little China (1986).

For example, strife leading to crucial and uneasy alliances in The Thing (1982), the politics of poverty among the "have-nots" in They Live (1988), and the brutality of prison culture in Escape From New York (1981) were films that were based on issues that defined the 1960's.

College-aged kids protesting the war, white and black activists in SNCC and other on campus groups in the 1960's, such as in the Freedom Riders and Viet Nam Veterans Against The War, had their lives regularly threatened. At demonstrations and boycotts protesters faced anonymous death threats, angry crowds of police and counter-protests in America. When racial tensions exploded, USC students, whether they had political agenda or not were in the center of LA to witness the riots of 1965 in Watts and in 1968 and 1971 in greater LA.

This kind of rage can be seen in the The Thing as the body of man rebels under an "alien" influence to destroy human command structure from above. The story is told through the eyes of the unlikely and lowest ranking heroes, Kurt Russell and Keith David, who end up, presumably, as the sole survivors. The plot follows a isolated, disintegrating outpost where anyone can be the enemy as an alien organism destroys the tiny Antarctic outpost. Lawlessness and a constant threat of horrible death from friends in claustrophobic quarters makes a great horror film. It is reflective of the social chaos in LA and the paranoia of Cold War politics.

As the Antarctic base is destroyed, along with any hope of survival inside of the military station, MacReady and Childs are left to die in the subzero cold as they carefully watch each other for signs that one of them is also "The Thing"0.

In John Carpenter's futuristic 1988 LA, ads get right to the point.

The themes of societal upheaval and individual paranoia are echoed in They Live (1988). In this film, the fight is taken to the Establishment by "Rowdy" Roddy Piper and Keith David. The Establishment in this is case are corporate aliens who are "buying" Earth by co-opting it's wealthiest citizens. The aliens lay waste to human higher brain function through TV, media and money while sending riot police into LA to destroy misfits - those who won't "play ball".

This time, at the end of then film, there are no survivors. David and Piper are executed by Piper's traitorous love interest. As he is shot in the back, Piper, or Nada as Carpenter dubs his hero for this film, attacks the alien signal used to control and corrupt humans. The signal, broadcast from on top of an LA tv station, is temporarily disrupted. At the end of the picture, the aliens are revealed for what they are - bug-eyed zombies.

In each of these fiercely anti-authoritarian films, the heroes are fighting off a powerful, nebulous and shape-shifting enemy. This enemy's most deadly ability is to co-opt or "take over" a friend from the inside much like in the the Thing.

However, in They Live, the former friends choose to "play ball" with their evil master for financial gain. This was much like informants and FBI agents that monitored the completely legal activities of civil rights leaders, youth groups and activist organizations in the 1960's and 1970's.

In They Live and as in real life, an embedded enemy could be right among the movement - never to reveal itself until it was too late.

In these films, there is an added degree of realism. The heroes don't like each other but work together to survive against a powerful enemy. It's interesting to note that Keith David appeared in both The Thing and They Live as an unwilling accomplice. In each film, his character bitterly fought against the outsider protagonist embodied either as the sombrero slinging MacReady or the angry drifter Nada. After fighting to a near stand-still, David played a pivotal role in destroying the threat to Man's dominion in The Thing and disrupting the sale of Man's soul in They Live. Issac Hayes the A #1 Duke of New York, Harry Dean Stanton as Brain and Adrienne Barbeau as Maggie.

The revolt of prisoners in Attica, New York in 1971, due to brutal conditions and severe overcrowding (ACF was built to hold 1,200 inmates and housed 2,225) comes in the form of the Duke of New York played by Issac Hayes. The Duke takes the President of the United States (a quaking Donald Pleasance) hostage in exchange for escape from the giant prison city.

The Duke uses his army of criminals to first hunt down the President and then kill the nearly unkillable Snake Plissken, a veteran warrior given the impossible task of tracking down and saving Donald Pleasance's neck. At the end, Plissken succeeds and none of the prisoners Plissken bargains with escape New York. Freed, the President returns with an audio tape containing with what he assumes is the formula for a cold war doomsday weapon. Instead, he is in possession of Ernest Borgnine's rockin' big band mix. The formula was the real reason why Plissken really went inside the city prison in the first place. The ending confirms Carpenter's view of the cold blooded nature of bureaucracy by placing the value of a weapon over human life - even when that life is the President of the United States.

This theme is recognizable in American culture and history. Greed, riots, and outsider heroes in situations echoing the social changes taking place in America. Audiences responded to John Carpenter's sci-fi and horror films because they were socially relevant and very entertaining. The characters had a grim credibility because they could have walked the streets of 1960's LA just as easily as they did in post-Apocalyptic New York.

Before his first big success in film, Carpenter worked on a shoestring budget on Halloween (1978) which cost $320,000 to make but made $45 million in the US when released. The unofficial word is: the original Micheal Myers mask for Halloween was actually a rubber William Shatner "Kirk" mask painted white early into production. The Fog (1980) made as a "studio" film for $1 million and earned $21 million in the US when most films cost 10 times as much to make.

When his career gained momentum in Hollywood during the production of The Fog, and two years after Halloween was released, Carpenter married the film's star Adrienne Barbeau who starred in Escape From New York (1981), Swamp Thing (1982), and George Romero's Creepshow (1982)). In the late seventies, Barbeau was one of the hottest actresses and sex symbols in the world. Carpenter was on top of the world both personally and professionally. The two were married from 1979 to 1984 and had a son together in May of 1984.

Today, John Carpenter is still a good friend of Stephen King and George Romero both of whom he has worked with on major films like Christine (1983) as a director and as a producer for Creepshow (1982). Aside from the many terrible Halloween sequels, he enjoys what most director's dream of: recognition for a series of uncompromising films that were both critically and popularly successful.

Notes:
0 = The prequel to John Carpenter's Thing was filmed in Toronto and will be released in the U.S. on October 14th 2011.

Video-On-Demand is available at:

Email ThisBlogThis!Share to TwitterShare to FacebookShare to Pinterest
Labels: Adriene Barbeau, Directors, Going to Pieces: The Rise and Fall of the Slasher Film (2007), John Carpenter, Keith David, Kurt Russell, What Has Been Called A Paranoid Masterpiece?