And on the eighth day, The Lord made Tura. Amen.

Tura Satana was born in 1935 as Tura Luna Pascual Yamaguchi in Hokkaido, Japan to a Japanese silent film star father and a Cherokee circus performer mother. Today, she is known chiefly for her role of Varla the wild female gang leader in Russ Meyer's cult classic Faster Pussycat, Kill, Kill (1965).

Her infamous "bad girl" role often obscured the sweet, wise and beautiful person that her friends and fans adored. Sadly, Tura passed away in the biggest little town on Earth, Reno Nevada, on February 11th of 2011 of heart failure.

In her acting and modeling career, Tura was known for her feisty stand-out performances in a lackluster B genre. Tura as Varla defined all similar roles portrayed in films such as H.G. Lewis's Gore Gore Girls (1968) to Michelle Pfeifer's Cat Woman in Bat Man Returns (1992). Arguably, Varla was the role that Tura was born to play.

Tura's childhood shaped her into a self-reliant, sexy and talented actress. She lived a difficult and arduous life that too often defined by bad luck, racism, vicious attacks and car crashes.

As part of US WWII policy towards Japanese-Americans, her entire family was forcibly relocated from Chicago to Manzanar Detention Center outside the desert town of Lone Pine, California when Tura was in elementary school. The Yamaguchi family re-settled in Chicago after the war ended in late 1945.

In Chicago, after being raped as a young girl by a group of five men Tura, learned martial arts as a coping mechanism. Her attackers were never prosecuted. Over the next 15 years, she claims to have tracked down each rapist and enacted revenge.

"I made a vow to myself that I would someday, somehow get even with all of them," she said years later. "They never knew who I was until I told them."

Because of the rape she was sent to reform school. There, she fought against a group of girls that attacked her because of her Asian heritage. The bullying stopped when she beat up a group of 5 girls up. She was expelled from the reform school and returned to parents in the west side of Chicago.

In 1948, when she was 13, Tura married 17-year-old John Satana. The arranged marriage would last less than a year. She would bounce across the country for the next two decades as a burlesque dancer until meeting Russ Meyer who was casting for his next film. 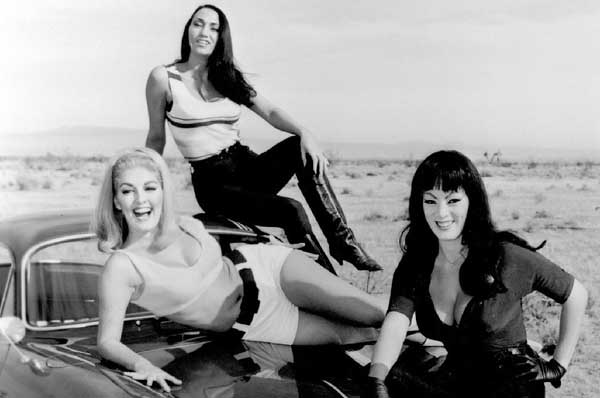 Several factors in this film would make Tura a star. The movie was shot in the Sonoran desert. Much like Lone Pine, it was a barren and lonely landscape. This had to have stirred up nothing but bad memories for her to work with. She had a dynamite body, dance experience and martial arts training which meant not only could she do her own stunts but Tura looked like a million bucks doing them.

After making The Doll Squad in 1973 Satana was shot by a former lover. The shooting would effectively end her career in film. She worked at an LA hospital and as a 911 dispatcher until in 1981 her back was broken in a car accident. She spent the next two years in and out of hospitals, having two major operations and approximately 15 others.

In 1980, Tura married a retired L.A. police officer and had two daughter together. They remained married for 20 years until her husband died in October 2000. Tura Satana was still extremely active on the convention circuit where she enjoyed being deeply loved and respected by her fans.

In 2010, TURA!, a documentary by Varla Films/Me and Ben Productions about Tura's life and work is scheduled to be released.

Wow, I must have read a dozen of these in memorium posts following the death of Mrs. Satana, but this was by far the best I have come across. Thank you so much for including information beyond "She was born, starred in a Russ Meyer film, and then she died."

Me again. Just wanted to let you know that I enjoyed this article so much that I chose it as one of my favorites from February, and included a link to it in the 5th "issue" of Spatter Analysis.