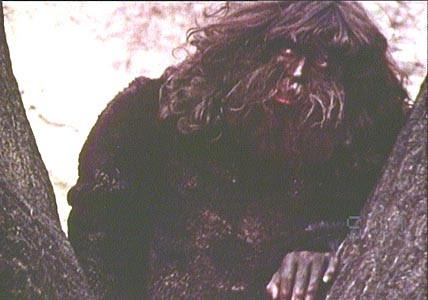 Sensational movies, like this one, are so terribly made that no square audience would spend five consecutive minutes watching without praying that it was a trailer for pseudo-horror films like the insipid Twilight or the even more pathetic Vampire's Apprentice.

The dreaded, time-honored tradition of mainstream culture gutting underground work and re-making it as meaningless drivel (see Twilight, Avatar, any D&D movie or tv series) will never, ever be able to formalize The Geek. It's too far out to be gentrified and too hilarious to ignore.

It goes like this, a bawdy and frisky Bigfoot meets two luckless bimbos in a one long classic of schlock camp meets supernatural softcore roughie. The Geek will never be updated to star former male models, perfect ab-bearing teenagers or Barbie look-a-likes boo-hooing over dead cell phone batteries with chipped nails. Movies like this scream "Fuck you, Hollywood!"

I defer to senior moderator Jack Smith, of Cult Movie Forum, for his learned opinion of the film:

Jaw-dropping yet pretty damned funny...
The "plot" of The Geek (1971) follows a group of six would be monster hunters (three male, three female) who trek off into the wilderness of the North-West in order to search for the elusive monster known as Sasquatch. Despite spending most of their time wandering off in two's to have sex the group eventually succeed in locating the Sasquatch. Terror soon ensues as Sasquatch subsequently turns out to be a savage sexual predator with his sights set on two of the women (including porno actress turned backwoods scream queen Lynn Holmes as "Girl in White Shorts").

Following the obligatory solemn, cautionary yet cheesy opening narration which warns about a dangerous man beast known as Sasquatch or "the geek" roaming the wild, untamed regions of the American north-west we are introduced to our cast of six slightly hippified would be Sasquatch hunters.

Although the opening text claims that The Geek was shot on location in Canada, Oregon and Washington it soon becomes clear this curio looks as if it was really filmed on a small patch of scrub land in Socal and resembles a grainy shot home video.

The Geek and his new mate contemplate the splendor of Mother Nature together.