The Dead Zone is so close of a perfect book-to-movie film that it's hard to find much better. Three creative forces came into near perfect alignment: the inscrutable, afflicted performance of Christopher Walken as Johnny Smith, the genius of Stephen King's reality in shorthand and the prolific story-telling talent (both visually and thematically) of David Cronenberg. The movie will knock you into next week.

The film opens on Johnny reading the ending from Poe's Raven to his students: "...my soul from out of that shadow that lies floating on the floor, shall be lifted...nevermore." As the bell rings, Johnny promises to read from The Legend Of Sleepy Hollow soon. Johnny and his gal, fellow teacher Sarah (the saucy Brooke Adams of Sometimes They Come Back (1991)) cut classes to enjoy a growing romance until an accident on a dark night destroys it. Johnny unwittingly slams into an 18-wheeled milk tanker and it's lights out for Johnny for five years.

He awakes in a private hospice where he learns that his life, his girl and his job have been flushed down the toilet while he was in a coma. Still recuperating, Johnny picks his life back up by finding that he's awoke with a kind of second sight. A power that manifests by allowing him to see the past, present and future by taking a person's hand. A gift that allows Johnny to see into the Dead Zone - the place where life and death intersect. This concept is rather awkwardly elucidated by Cronenberg, who is much more visceral or bodily focused in his films. It's the only real misfire in the film. The Castle Rock Killer learns the hard way not run with scissors in a Stephen King movie.

Early in the film, as his visons begin, Johnny is shown with his physical body in one place, the hospice, while his consciousness is in a burning bed warning a little girl to get out of a burning house. The scene's editing intertwines the two shots in a brilliant cross-cut that Walken's performance welds together. This effect is enhanced in a later scene as Walken states to a disbelieving Tom Skerritt at a murder scene: "I was there! I was watched the whole thing. I was there."

On the trail of the Castle Rock Killer, Johnny finds himself caught in the Dead Zone.

The movie's shot composition and experimental visual elements are to be noted. The stark snowscapes are defined by thick black tree lines. A subterranean murder scene in a darkened tunnel is framed in brilliant white highlights. A murder victim in a park gazebo is surrounded by a pure white layer of snow disconnecting it from the larger world. The gaunt figure of Johnny, in his black Navy jacket, against the icy gray skies. This harsh black and white element delineates the living and the dead with Johnny right in the middle.

The color green, ranging from a dull green in the hospice (and Johnny's clothing) to an eerie bright shade of green in The Castle Rock Killer's home convey the nearness of Johnny to the supernatural in the first third of the movie - a technique lost for some inexplicable reason the rest of the film. Senate hopeful Greg Stillson has also received a vision - from the Crazy Zone.

The final two-thirds of the film revolve around Johnny re-dedicating himself to teaching, accepting the loss of Sarah and finding that he's the only man who can stop a delusional politician from starting a nuclear war.

Acting as a tutor, Johnny encounters Senate hopeful and successful psychotic Greg Stillson who, himself, has received a vision from the Crazy Zone that he will be "President of the United States!". Johnny sees the evil little creep starting World War Three. The possibly reality occurs when future President! Stillson receives another call from the Crazy Zone in the middle of the night, this time to preemptively launch nuclear missiles at Soviet Russia. 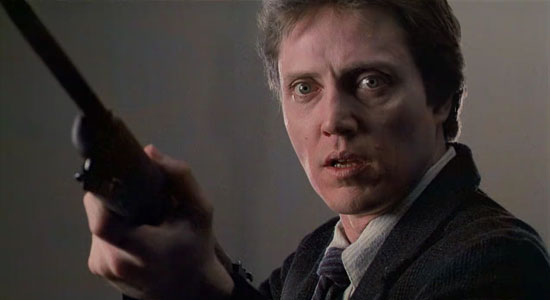 All the movie's elements fit together in an uneasy narrative driven by brillant performances every actor in the film. From Martin Sheen, as the evil Greg Stillson with his henchman Géza Kovács as Sonny, supporting actors Herbert Lom as Dr. Sam Weizak and Leslie Carson (Barry Convex of Videodrome (1984)) as a blackmailed newspaperman - each turn in inspired performances. This is a real testament to the detail-oriented casting and direction of David Cronenberg in a movie that continues to floor audiences.

Notes: The Dead Zone screenplay was written by the late Jeffrey Boam who also wrote Innerspace (1987) and two of the Lethal Weapon movies before becoming the executive producer for 20st Fox's doomed Bruce Campell vehicle Brisco County Jr. in the early 1990's!

The Dead Zone On DVD and Video-On-Demand is available at:

Email ThisBlogThis!Share to TwitterShare to FacebookShare to Pinterest
Labels: Are You Aware Of What Greg Stillson Stands For, Cronenberg, Murray Christmas, Stephen King. X-Mas, Walken