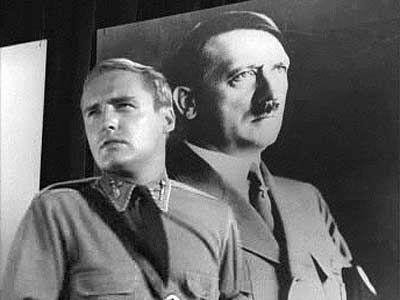 He's Alive, broadcast in 1963 (from season four episode 106), featured the improbable rise of a emotionally shattered young man as he makes an unlikely ascent into the role of an American Hitler. The role starred a then unknown actor Dennis Hopper.

The Twilight Zone's casting directors (under the keen eye of Rod Serling) were on the look out for new talent in the early sixties. The Zone gave many struggling actors, like William Shatner and Lee Marvin, starring roles on national television. One of these roles went to a young, angry Dennis Hopper.

Hopper was previously cast in two roles with James Dean (whom he admired immensely) in Rebel Without a Cause (1955) and in Giant (1956). Dean's death in a 1955 car accident affected the Hopper deeply. In LA, Hopper's roommate actor Nick Adams, who was known for roles in Japanese films, also died young before he could achieve lasting fame. All of this emotional rawness and professional trugdery in tv westerns happened years prior to his acting and directing break through on Easy Rider (1969). In the late 1950's and 1960's Hopper's career was strictly bit roles in crumby cowboy flicks and B-movies. 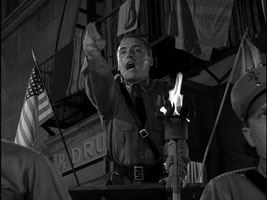 In He's Alive, broadcast in 1963, Hopper plays Peter Vollmer a young man who taken in from the city streets by an old Jewish man. Ludwig Donath plays an elderly Holocaust survivor only to have Vollmer turn neo-Nazi on him when Vollmer trades his soul for the cunning advice of a mysterious, shadowy man with a German accent.

After a series of successful rallies, the stranger in the shadows reveals himself to be, in fact, Adolf Hitler (veteran tv actor Curt Conway). On Hitler's orders, Vollmer kills his benefactor the old man. When the police arrive to arrest Vollmer for conspiracy for a previous crime he's shot while fleeing the scene. Hitler leaves, off to search for another worthy candidate.

In closing, Rod Serling eulogizes democracy as Hitler scuttles away in the shadows:

"Where will he go next, this phantom from another time, this resurrected ghost of a previous nightmare - Chicago; Los Angeles; Miami, Florida; Vincennes, Indiana; Syracuse, New York? Anyplace, everyplace, where there's hate, where there's prejudice, where there's bigotry. He's alive. He's alive so long as these evils exist. Remember that when he comes to your town..."

According to the Internet Movie Database, He's Alive drew more hate mail than any other episode. This reaction was a solid review of Hopper's performance and the country's reaction to violent totalitarianism if only in a fictionalized metaphor.