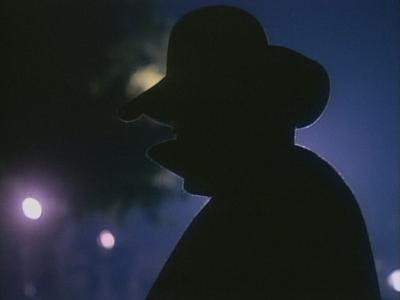 The Shadow Man, Episode 23 from season one, was directed by Joe Dante, who also directed The Twilight Zone Movie (1983) Gremlins (1984), and the original Howling (1981), is an interesting tale of a bullied kid who seeks a particularly strange and vicious revenge on a schoolyard bully.

Danny (Jonathan Ward) is the smartest and least-liked kid in school. A group of jocks, led by dumb jock Numero Uno "Eric" ambushes Danny to frighten him to death. Danny seeks a literal and frightening revenge when a mysterious Boogie Man-like entity crawls out from under Danny's bed that night. The demon indentifies himself as the Shadow Man. The being swears allegiance to Danny that he will never harm the person under whose bed he lives. Then, the Shadow Man leaves.

The next day, Danny tells his friend about the Shadow Man but his friend dismisses it. Later, Danny hears about two children were attacked by what witnesses say was a maniac that looked like a "shadowy man". That night, Danny falls asleep but wakes up as the Shadow Man, after reassuring Danny again, roams out into the night. Leanne, the girl he has a crush on, needs help in Algebra, so he goes to her house to help. She's impressed that he would come out with all the shadow man attacks going on.

The Shadow Man informs Danny that he is "a Shadow Man from under someone else's bed..." as Danny chokes to death in his icy hands.