Head Chef Richard Kiel prepares to close the book on the human race in: To Serve Man (1962).

To Serve Man (from season three episode 89) featured the unmistakable Richard Kiel of Eegah! (1962) and The Spy Who Loved Me (1977). To Serve Man is one of the most sardonic and twisted episodes ever launched from the brain of Rod Serling. From a short story of the same name, originally a pulp story appearing in Galaxy Science Fiction in 1950, by Damon Knight.

A strange race of alien giants, known as the Kanamits, land on Earth promising to be humble servants to the cause of humanity. The aliens' intention, announced at the United Nations in New York is to serve Man by sharing their advanced technology. The aliens quickly solve all of Earth's greatest woes, eradicating hunger, disease, and warfare. Soon, humans by the hundred are volunteering for trips to the Kanamite home planet, which they believe is a paradise. 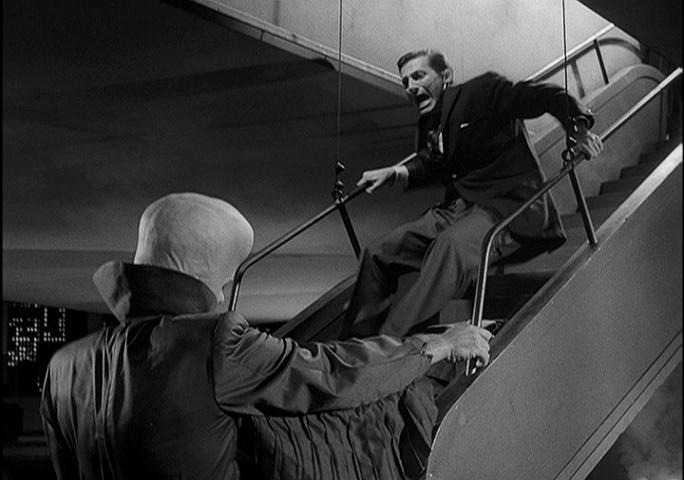 Not all is well, however, when a crackerjack ace code-breaker steals a copy of the Kanamite book and discovers the aliens' true intentions: to turn Man into interstellar Spam. Their book, "To Serve Man," is actually a cookbook. The aliens miraculous gifts were designed to make humanity complacent like fattened cows before slaughter.

In the end, Michael Chambers (who's been narrating this story in flashback) is aboard a Kanamite ship, heading for their planet (and almost certain consumption as Man Spam). He looks directly at the audience and says, "How about you? You still on Earth, or on the ship with me? Really doesn't make very much difference, because sooner or later, we'll all of us be on the menu...all of us."

In 2001, the original story by Knight was awarded a Retro Hugo Award as the "Best Short Story of 1951". To Serve Man was also the basis for V: The Series (1984) - a 1980's tv series about hungry reptilian aliens who planned to do very much the same thing to Marc "The Beastmaster" Singer and Faye Grant.