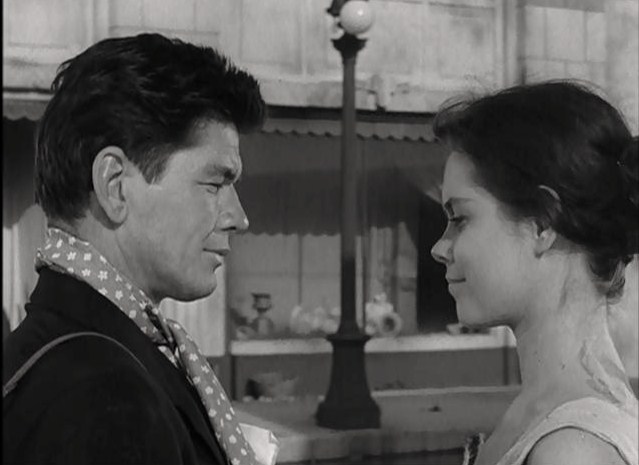 Charlie Bronson ends his lonesome wandering in the post-Apocalyptic world of Two.

Two (season three episode 66) aired in 1961, featured two enemy soldiers, a man and a woman, facing paranoia and destruction in a post-Apocalyptic world that had nearly bombed itself into exinction.

The episode opens on a female soldier of a final atomic war, her face dirty and her army uniform tattered. The woman (played by future Bewitched star Elizabeth Montgomery) stumbles into a deserted, burnt out city. She looks into some of the shop windows then finds a restaurant. where she searches for food. The woman finds a can of chicken, but before she can open it, a man (played by Charles Bronson) walks in and eyes the food from the doorway.

Recognizing his uniform as an enemy uniform, the woman begins defending herself and her findings, initially throwing pots and pans, and attempting engaging in hand to hand combat with peak physical condition Charlie Bronson. Not a bright idea, lady!

The man knocks her out and begins to eat ravenously while the woman lies unconscious on the floor. He notices a calendar with a woman on the wall and turns to look back at his opponent. The man seems to realize that he needs companionship more than he wants to continue a pointless conflict. 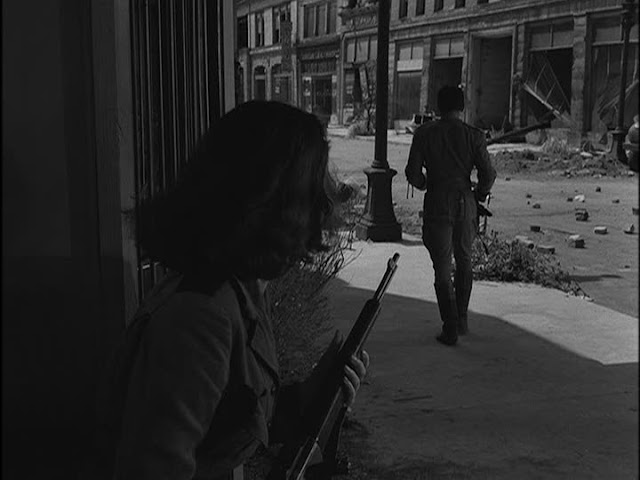 When she comes to, the woman understands none of the English the man uses to reassure her. However, she follows Bronson from the restaurant to a theater where he stares at a poster advertising a romantic film (entitled "Enough Romance"?). The man turns to smile at the woman again hinting that he longs for her companionship. But hostility and suspicion flare again when they run across skeletal remains at the theater entrance. They each take up their nearby rifles simultaneously aiming at each other. After a tense moment Bronson walks away only to be grazed and slightly wounded by the his female counterpart.

In the end of the episode, they shed their uniforms. With their guns slung over their shoulders, they walk away side by side along the road, more closely resembling a bride and groom than enemy soldiers.