In ancient 1986 America, primitive man used gory horror to communicate with his world.

Director Stuart Gordon and actor Jeffery Combs were a solid 80's horror duo that made a handful of great movies, including Re-Animator (1985) and From Beyond (1986). Many of their movies remain cult classics today. The unmistakable combination of scripting, shot composition and performances made over-filmed b-movie material (mad scientists, zomboids and half-naked bunnies) come to a new and shocking life. As one of Gordon/Combs strongest films From Beyond was recently re-released on DVD, including extra scenes deleted due to MPAA censorship in 1986, on September 11th 2007.

Gordon, a Viet Nam era anti-war activist with roots in Chicago, tends to display a unique understanding of Lovecraftian horror and has been quoted[0] as saying: "The Lovecraft purists are always very upset with me because I'm always throwing nudity into these movies ... my argument is that there is a tremendous sexuality about Lovecraft, and a fear of sex, taking the reproductive act and turning it into something monstrous."

In From Beyond, originally written by Lovecraft in 1920 and first published in 1934 in The Fantasy Fan, Dr. Pretorius (Ted Sorel as a Bride of Frankenstein character role) and his colleagues conduct experiments on the mysterious pineal gland in order to open the human mind to unknown and otherworldly dimensions. When the experiment succeeds the researchers are attacked by twisted alien creatures, which unbeknownst to mortal man, are floating around the periphery of his pale consciousness constantly. 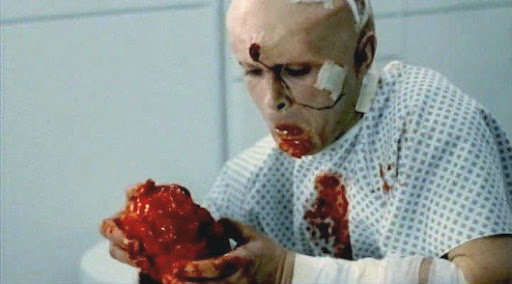 Hospital personnel are the cornerstone of any healthy patient's diet.

When Dr. Pretorius is killed his assistant, Dr. Crawford Tillinghast (Jeffrey Combs)[1], falls under suspicion and is locked up in the Psyche Ward due to his halting explanations. Only an ambitious psychologist Dr. McMichaels (the frequently freaked Barbara Crampton)[2] believes him and wants to continue Pretorious' dubious experimentation.

As the plot thickens, the presumed dead Doc Pretorious returns transmogrified[3] and then toplessness and terror ensue! From Beyond is a genuinely scary film with amazing special effects from former Videodrome (1983) make-up assistant Mark Shostrom. Shostrom also created the practicals for Evil Dead II (1987), A Nightmare on Elm Street Part 2: Freddy's Revenge (1985), A Nightmare on Elm Street 3: Dream Warriors (1987) and Phantasm II (1988).

From Beyond easliy earns itself a total of four manling skulls outta a possible four!

Notes:
[0] = Quoted from Stuart Gordon's IMBD biography.
[1] = Jeffrey Combs played the silent role of the insane Dr. Vannacutt in the 1999 remake of House On Haunted Hill starring Geoffrey Rush and Famke Janssen according to a recent interview.
[2] = Barbara Compton, a pale blonde with a bodacious bod, also appeared in Re-Animator in 1985.
[3] = Transmogrify Originally an ancient alchemy term to change grotesquely from one form into another. In Pretorius and Tillinghast's cases, from the human to the demi or quasi human.

From Beyond on DVD and Video-On-Demand is available at: