Writer Gilbert Ralston's 1969 book Ratman's Notebooks was made into three surprisingly successful movies: the original Willard (1971), Ben (1972) and the re-make of Willard starring the ever-rapacious Crispin Glover in 2003. Ralston served as a script supervisor for Willard (1972) and given a writer's credit on all three films. 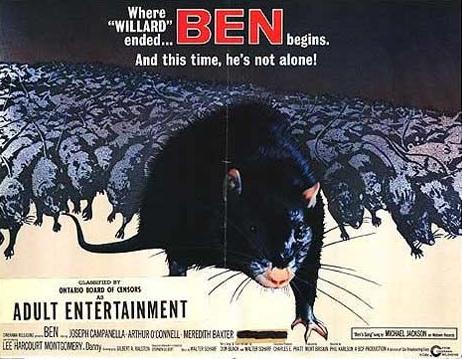 Where Willard ended - Ben begins... in a pile of dead rats.

This flick is punctuated by unusual compassion between Danny the sick child and Ben the intelligent rat. The main story arc concerns civilized man's outrageous crimes against animals, such as the brutal killing of the rat named Socrates. Modern man's crimes are punished by hoards of beady eyed rats directed to kill by a single intelligent rodent named Ben.