All naked space vampire chicks is evil? Now that is just flat out ignorant.

Life Force (1985) is a British Vampire-Apocalypse film, directed by Tobe Hooper (Texas Chainsaw Massacre in '74) and a stand-out in the often arduous genre (John Carpenter's Vampires, 31 Days Of Night) of vampire movies. The movie sets the standard for later Apocalyptic films like 28 Days Later and Zach Snyder's Dawn Of The Dead (2004) by using amazing effects, great second unit direction of immense crowds and referencing the otherworldly nature of Ridley Scott's Alien (1979).[0]

Life Force features the incredibly well-cast 20-year-old Mathilda May, a ballerina from the age of eight who won the Premier Prix du Conservatoire de Danse of Paris in 1981 at age 16. Mathilda stars as the evil space vampiress with-no-name who sets her sights on sucking the life out of Earth starting with the hapless Col. Tom Carlsen, played by Steve Railsback (Alligator II: The Mutation and Col. James Vise from Fox's The Visitor from 1997-1998). 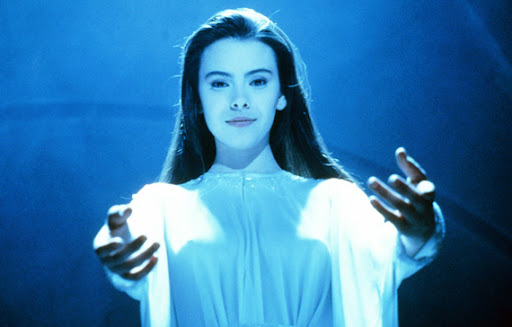 Come 'ere and give your Space Momma a big smooch, whydontcha?

The movie, which draws heavily on the tried and true sci-fi tradition of Earthlings vs. Evil-invading aliens, delivers on many levels. The movie takes it's title from the method in which the space vampires feed. By using practicals of vampire corpses/victims combined with a lighting and film effect the movie illustrates the vampiric voodoo that drains humans of their souls. These unwary souls are rendered in a kind of low-voltage blue lightning and snacked on by the space vampires and their thralls.

Email ThisBlogThis!Share to TwitterShare to FacebookShare to Pinterest
Labels: Flicks, mathilda may, vampire