The Movie:
HG Lewis's Something Weird (1967) is a cheap grinder about E.S.P. and "black magic" looks an awful lot like Blood Feast (1963) but was more watchable than the truly no-budget Gruesome Twosome (1967) which featured decapitated mannequin heads as central characters ... with lines.

From 1960 to 1977, H.G. Lewis, who is alive and well today, used threadbare scripts and strippers-turned-actresses to shoot no-budget grindhouse movies in Chigago and Southern Florida. Prior making movies like the awful Wizard Of Gore (1970) (shot in Chicago in 1968) Lewis was a literature professor at Mississippi State and later worked in radio. After leaving film-making Lewis started building Communicomp, which became a powerhouse P.R. firm in Florida before being bought for $15 million in 1997. 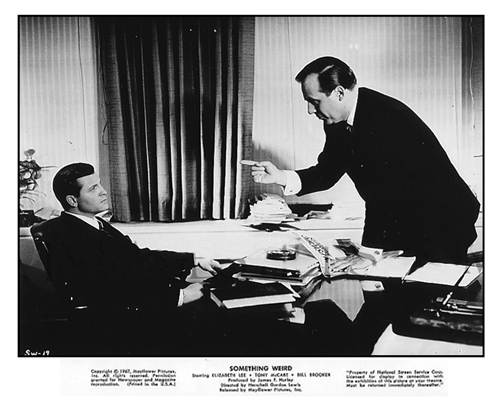 OK, smart guy. So whatta you wanna call the movie?