Who's that ancient deity whose a sex machine with all the chicks? Q! That's who...

Today, in New York City, a flying green snakoid rules w/a tyrannical iron claw. Fiction, sez you? Well, allow me to present Creatures Exhibit #1: Larry Cohen's Q: The Winged Serpent that is. Oh, unwary manlings, the Sleaze-A-Saurus loves him some Larry Cohen. It began with the It's Alive franchise that featured killer mutant babies then the awful consumerism of The Stuff (1984), lasting to present today with his unexpectedly edgy script for Phone Booth (2002). 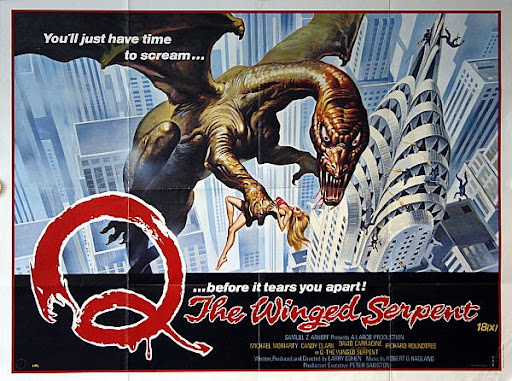 The animation for the monster was done with a remarkable similarity in style to Ray Harryhausen (Clash Of The Titans) but the film remains universally disliked by many. Dave Allen (Rick Baker's assistant on The Howling in '82) was on the Animation Production Team that animated Q. Allen went on to several high-profile assignments including: Twilight Zone: The Movie (1983), acting as chief puppeteer for Spielberg's *batteries not included (1987), at George Lucas' ILM for Ghostbusters II (1989), and Allen worked on Puppet Master II and V as the visual effects supervisor for his own company, David Allen Productions.

Randall William Cook, also on the Animation Production Team for Q, went on to work on all three Lord of The Rings films as an Animation Designer and Supervisor at Weta Digital in New Zealand for Peter Jackson.