It's not funny because it's true. It's scary because it's true. Based on the snakehead fish incident in a Crofton, Maryland pond, Frankenfish is a made for TV movie from the Sci-Fi channel. This film is one of two movies based on this real life incident, the other being the more successful Snakehead Terror.

Directed and co-written by Mark Dippé (former Industrial Light & Magic animator and director of Spawn (1997)) Frankenfish is centered deep in the Louisiana bayou where the eating is good. The only problem is: Man is on the menu. That is, if yuppies are in same biological category as humans. And if years of watching bad b-movies has taught America anything it's that yuppies have got it comin'. In spades. 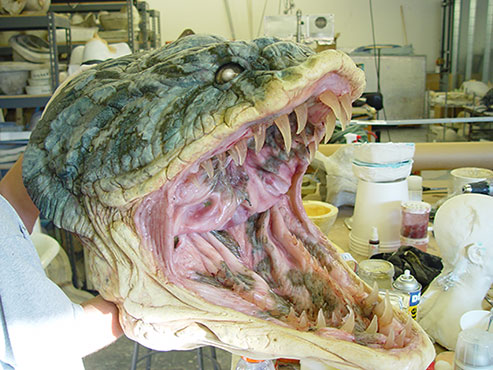 Frankenfish sports eye-popping practicals and CG effects for the main monster(s) plus flock animations of hungry lil' baby Frankenfish as they fill their precious lil' bellies with the two things that Louisiana does have in a great abundance: yuppies and swamp billies!

Mark Dieppe's movie features work from his own FX company none other than The Animation Picture Company (TAPC) whose credits include FX for S. Darko and Dead Birds.