Flicks: Piranhas! Part I and II


What's part bat, part fish and all trouble? None other than the oft-misunderstood Piranhners!

The original Piranha, produced by Roger Corman's New World Pictures in 1978, was a classic 70's horror movie mix of dark humor, sexy brunettes and gore. Featuring the brilliant late Mr. Kevin McCarthy (whose 204 film appearances include Invasion Of The Body Snatchers and Twilight Zone The Movie), Dick Miller (Bucket Of Blood) and the adorable Barbera Steele.

With Piranha 2: The Spawning in 1981, Mr. James Cameron (Avatar, Titanic) made his inauspicious and official directorial debut as the American director for the Italian production of Pirahna II. Although Cameron has continuously fought to have his name removed from this film due to his spectacular success as a film maker beginning with The Terminator, all his efforts have failed.

Cameron is to be forgiven for this effort. This is not because of his shame of making a bad movie as a young director but due to the fact that in 1981 the film's Italian producer Ovidio Assoniti ended up firing Cameron at the end of the production and taking full directorial credit. The ol' Hollywood handshake - in Italian... 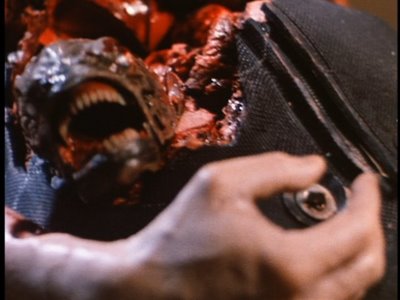 Pirahna Two: The Spawning features veteran actor Lance Henriksen, friend to Cameron and a re-occurring supporting actor in many of Cameron's blockbusters such as Terminator and Aliens. Hendriksen co-stars as Police Chief Steve Kimbrough in a b-movie with unusually well-crafted SFX (flyin' and walkin' pee-rahna!) that is primarily nudity driven, in the best of Italian farce that features with some lighter moments mixed in with a generous portion of gore.

It should be noted that Lance Hendriksen has appeared in 177 films and games and counting. He will soon be appearing in Tron: Uprising an animated TV series set to debut in 2012 from Disney.