A forgotten horror classic from the original Universal cycle of Dracula, The Wolf Man and Frankenstein.

For the 9th Day of Slash-Mess your intergalactic Overlord imposes upon you: cinematic history with actor Bela Lugosi. Lugosi was a Romanian legendary actor and was in the definitive black-and-white horror movies made in the "Universal Cycle" along with Dracula (1931), Son of Frankenstein (1937) and The Wolf Man (1941).

In White Zombie, Bela stars as the diabolical Murder Legendre one of few white men to be initiated into the diabolical voodoo religion. Legendre belongs to a nameless death cult that uses mindless zombie servants created from the Cuban or Dominican natives on an island off the coast of Florida. Unbekwnowst to the hapless group of Americans that visit the island, these zombies were once human as themselves but now toil ceaselessly for their evil master. 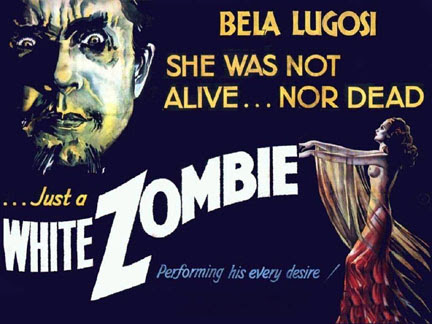 Creating zombies ain't that hard, pathetic hum-mon. Throw cash directly at their faces until their eyes glaze over. Duh!

Deep in the secluded island countryside a frantic American man turns to Legrande to act as a witch doctor to win a wigged out woman. Legrande agrees and lures the flighty lady that he loves away from her fiance and turns her into a zombie slave.

In fact, a good deal of the population are wandering dead-eyed zombies. Many work in the island's dense sugar fields and refineries as part of a plantation population. Some of the more decrepit zombies fall into the archaic cane crushers becoming an active ingredient in the fields major export - Legendre's Zombified Sugar.