AKA "Night of the Intruder", "Bloodnight" and "Night Crew: The Final Checkout", The Intruder has come to us much like Return of The Living Dead and Night Of The Comet - a precious relic of 1980's American culture where hair was big and the good times - well, they were even bigger.

This slasher is set in a grocery store and tag-lined with "A new dimension in terror". The movie is notable due to the fact that it's the directorial debut of Scott Spiegel, the co-writer of Evil Dead 2 and features both Raimi brothers as super market employees.

Spiegel wrote and directed The Intruder as his first major Hollywood feature and, learning from Sam Raimi's example, was not afraid to bring out the gore and excellent bloody effects - including a mid-skull decapitation with a beautifully made practical!

This approach to horror would become a trademark on his next pictures including: From Dusk Till Dawn 2: Texas Blood Money (1999) and Hostel III (2011). 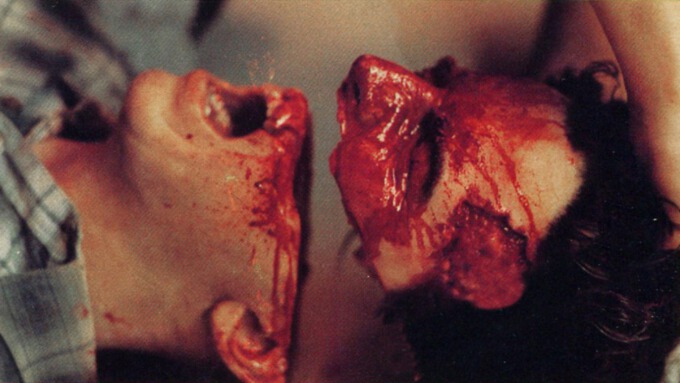 Heads up, people! I'm fresh outta Excedrin and I got a headache this big.

The Intruder is more of an effects movie surrounded by a lot of suspicious giallo styled plot. Bruce Campbell cameos as a cop, Sam Raimi appears as "Randy" and Ted Raimi (Sam's brother later be featured in Xena and Raimi's first Spider-Man) appears in the film as "Produce Joe". Emilio Estevez's sister and Martin Sheen's daughter Renée Estevez stars as Linda.

The Intruder has some decent scares, imaginative effects and rises above a lot of 80's slashers one-dimensional approach to serial killer flicks.