Another entry into the genre of Failed Hitchcock Remakes. This one much more painful that the rest.

A surprising, one day early, Slash-Mess to you, horror movie fans! Slash-Mess returns at it's regularly scheduled time for Day Two of Slash-Mess Friday December 14th at 12AM - sharp.

And now, the warmest Slash-Mess Greetings to one and all. At last, your scaly, alien Overlord has come once again to provide the precious gift of entertainment to all the really bad boys and ghouls! Let the Slash-Mess Season begin by stabbing deeply within the hearts of one and all with: BIRDEMIC: SHOCK AND TERROR (2011).

Director and writer James Nguyen's 2011 homage to Alfred Hitchcock's classic The Birds (1963) has made him the modern day equivalent of notorious b-movie pioneer and female clothing enthusiast Mr. Ed Wood.

Nguyen's Birdemic is awful. Even for a movie that doesn't fully realize that it is a parody it's awful. Subtitled "Shock and Terror" the only thing shocking about this movie is that it was made and distributed in the first place. The "Terror" part must reference the incredibly monotonous score, the wooden acting and complete lack of passable special effects.

The "effects" are made up of pathetically composited 3d/CGi brown eagles. It's like looking at a bunch of stiff super-market stickers slapped on top of digital video. Not only do they look like they were downloaded from a stock model site - they are extremely poorly animated and this poor animation is used for each of the models...

Severin Films picked it up anyway and released it by first premiering it as schlock in February 27th at Cinefamily in Los Angeles, California in West Hollywood complete with Adult Swim hosts Tim and Eric. The debut featured loud speakers in front of the building playing the sounds of human screams and birds screeching. And that was just the audience reaction.. 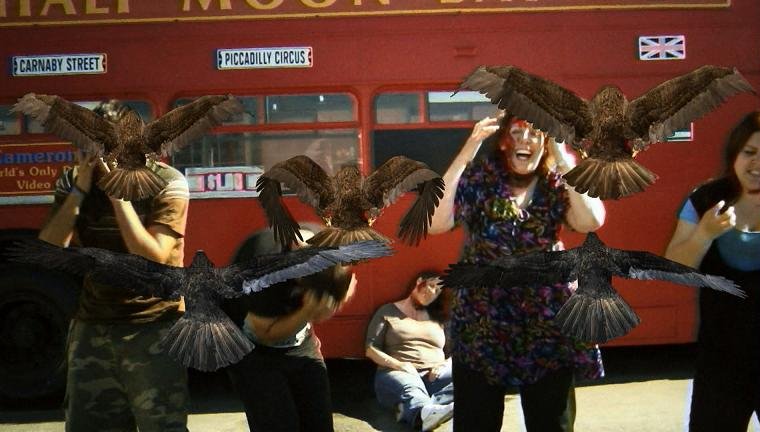 OMG! We're being attacked by mediocrity and apeshit entertainment management!

If this wasn't bad enough the sequel is coming in 2013. You guessed it, Birdemic 2: The Resurrection. The only slim ray of light in this exercise in terrible choices is that the hot (so hot!) lead actress Whitney Moore is returning for her role as "Nathalie". I hope that if someone "wins" the Birdemic - that it's her.

Now, please unwary hu-mons, for the love of all that your species claims is holy, stay away from this wretched movie.

Slash-Mess returns at it's regularly scheduled time for Day Two of Slash-Mess Friday December 14th at 12AM - sharp.