Flicks: Slave Girls From Beyond Infinity (1987)


In space, no one can believe that zero "G" jugs are in fact a jiggling and undeniable reality.

The second Urban Classics feature film of this month is Slave Girls From Beyond Infinity (1987) a kooky take on intergalactic slavery seen through the paradigm of a 1980's sci-fi Star Wars rip-off. Fans of Kentucky Fried Movie (1977) or Roger Corman's Galaxy Of Terror (1981) will see these two classic movies inextricably merged into one super-mutant of a bad movie that was awful enough to end the career of it's director Mr. Ken Dixon.

Brinke Stevens (Sorority Girls In The Slimeball Bowl-O-Rama) co-stars with Cindy Beal and Elizabeth Kaitan (Silent Night, Deadly Night Part 2) in this gem of of Kidnapped Females Taken by Alien Overlords (to do their awful bidding) genre movie. The terrible looking "alien" costumes (think Predator on a shoe string budget and no Stan Winston) and wannabe old school Cylons (Battlestar Galactica) are enough to stop any fair-minded viewer in his or her tracks!

The twist is that these bleach-and-tanned southern Californian bimbos (complete with Aerosmith/ZZ Top/Crocodile Dundee references) aren't having any of this slave girl action. They quickly club their guards over the heads with flimsy props and in even flimsier bikinis in order to make good their space escape. 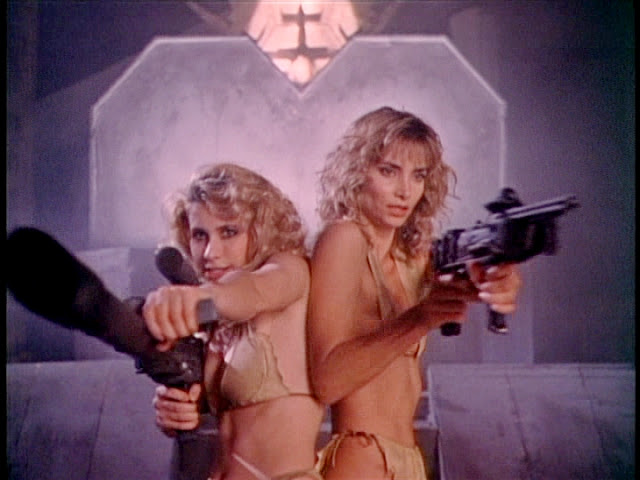 1987 marks the year the line "Let's blow this popsicle stand" was used appropriately in a motion picture.

Things get even more referential when the two slave girls crash land on a nearby planet where they are hunted by friendly fellow named Zed (Don Scribner) a la The Most Dangerous Game (1932) which would be great - if this plot point had not been completely exhausted for four decades by the time it come into usage for this film.

You manlings may enjoy this film yet. The models, especially Kaitan, are in excellent physical shape. They make for enjoyable watching as they bounce, with all of help that 1980's contemporary plastic surgery can afford, hither and thither while being "chased" by a series of poor suckers in terrible costumes.