Two underground horror baddies find out that cookies and weed are a diabolical combination!

Two latter day movie monsters clash in film that is completely filmed in Troma-vision but is in fact a Charles Band Full Moon Entertainment picture... complete with Asian rastas.

Monster #1: The Gingerdead Man - a Child's Play type of villain with serial killer Millard Findlemeyer's soul - originally played by Gary "Frickin" Busey. He first appeared in a short called The Baker's Dozen by Jethro Rothe-Kushel. This was made into a feature in 2005 by Full Moon.

Millard Findlemeyer, still a tasty but homicidal graham cracker, goes about looking for more victims in the next two sequels to follow including: Gingerdead Man 2: Passion of the Crust (2008) and Gingerdead Man 3: Saturday Night Cleaver (2011). 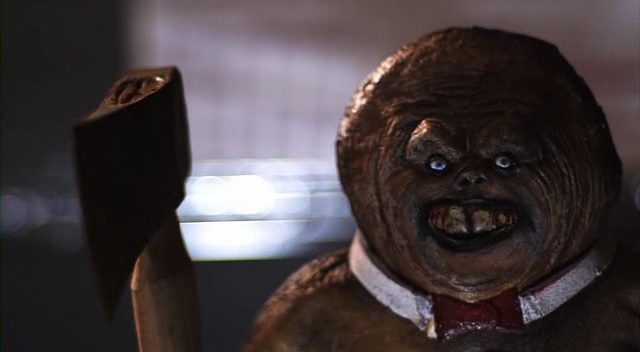 Evil Bong (2006), Monster #2, began in life as a Tommy Chong vehicle. This production happened just after his time in Taft Federal Prison from 2003 and a fine of $103,000 for selling bongs and paraphernalia in US vs Chong. The description for this films is: "a old giant bong proves to have strange magical powers. When smoked, said bong sends a person to a bizarre drugged-out alternate realm from which there is no easy escape."

In Chong's case that "alternate realm" was a nine month sentence bunking with the "Wolf Of Wall Street" Jordan Belfort.

The Evil Bong, a wise-cracking water bong that kind of sounds like Frankie Lymon, starred in two sequels after the original: Evil Bong II: King Bong (2009) and Evil Bong 3-D: The Wrath of Bong (2011).

This film, combining the two absurd "monsters" is much more watchable that the truly terrible Puppetmaster vs Demonic Toys (2004) or the other six films from the individual franchise. A great watch for Troma fans.